The Fight For PAYE

The Fight For PAYE

As a JIB approved electrician, like many in the construction industry have found it impossible to get a job on the cards for the last ten to fifteen years. Instead, I have gone around working for various agencies or CIS self employed direct for various contractors. 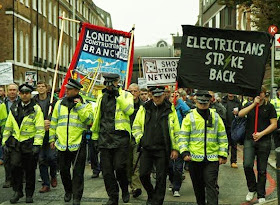 Agencies and self employment has lead without doubt to a race to the bottom when it comes to workers terms and conditions. Instead of agency labour being bought in to cover short term demand for extra manpower, it has become the main form of employment throughout the industry. This has weakened on site union organisation, bypassed employment laws so that companies can blacklist anyone they deem a “troublemaker” and seen pay frozen if not fall over the last decade.

In 1999 I was earning £125 a day in London as a spark. Now, fifteen years later, I’m earning £140 a day while seeing everything else triple in price and the cost of housing becoming so high that even barristers are being priced out of the city. Without doubt it is far better financially if you are lucky enough to be directly employed for a company, this was shown excellently in an earlier blog post (Are we better off on the cards or CIS). Not to mention having the ability to organise on site to improve wages and condition and not having to worry about the dreaded tap on the shoulder on a Friday afternoon telling you you’re not needed any more.

The big question in all this though is how do we get to the point where it’s not lucky to have a job on the cards, but the normal form of employment in a massive industry that is vital to the UK economy. I believe that there have been three dramatic shifts in the last couple of years, which give us the best chance we have had in a long time to turn things around and get everyone the full employment rights they deserve.

The first of these is the two major disputes we have had in the industry in recent times. One during which the seven major electrical contractors tried to demolish the JIB and introduce BESNA. The other was against the dismissal of a shop steward on the Crossrail project. This without doubt has made the major companies realise that workers do still have a bit of bite when needed  and made them quite wary about disruption on projects, where profit margins are so small that any stoppages can seriously affect them financially.

We have shown that when needed Unite is able to hold a ballot for industrial action, backed up by the muscle of the rank and file in the form of occupations and unofficial walkouts. So much so that we are now in a situation where the companies who are getting contracts on Crossrail are saying they will pay everyone full JIB terms and conditions, as well as having the Hinkley point agreement that is considered by most to be a ground breaking agreement. (http://www.unitetheunion.org/news/constructionunionssigngroundbreakinghinkleypointagreement/)

The second thing that may work in our favour but at this stage is still unclear, comes from the most unlikely of places: the Conservative Party. In his autumn statement, the Chancellor George Osborne announced he was starting a consultation into changing the tax laws from April 2014, which will stop employment agencies disguising their operatives as self employed (https://www.gov.uk/government/consultations/onshore-employment-intermediaries-false-self-employment).

The exact details of the changes that come into effect from the 5th April 2014 have still not been published. Various rumours and guesses have been circulating around the industry for several weeks. Most agencies though seem to be forcing their workers down the route of signing up to umbrella companies. A move which will leave workers considerably worse off.

An Umbrella company basically acts as your employer rather than the agency,  passing on their responsibility for holiday pay and employers national insurance onto you. Before you even pay the tax and national insurance that you are liable for, they will deduct 13.8% employer’s contribution and 12.07% holiday pay (which you get back at a later date).

So for example, if the agency is paying £15 an hour, the Umbrella company will deduct £3.88 for the employers part, leaving you earning the equivalent of £11.12. You will then pay the normal tax and National insurance on. All this doesn’t include the weekly admin fee and the liability insurance you will have to pay to the Umbrella company. You can offset some expenses like travel and phone bills etc, but if you get investigated by the tax inspector you will have to provide receipts. If they then decide that the claim isn’t legitimate, you will be the one responsible and will have to repay the tax and may face a fine. When you do then decide to take a holiday, you will get back the 12.08% that was stopped for holiday pay which you will pay tax and national insurance on.

So why am I saying this may possibly work in our favour? Firstly, this will have to demand some sort of industrial response from Unite and the Rank and File will have to mount a leverage style campaign for direct employment. But also, there’s two points to the proposed new legislation that has caught my eye:

“It is proposed that where a worker is engaged through an intermediary (polite way of saying agency), there will be a presumption that there is control over the worker.  This will mean that the intermediary will need to deduct income tax and NICs at source and the intermediary will be responsible for paying employer NICs. This change will be supported by a requirement to submit a quarterly statutory return.”  http://www.greenwoods.co.uk/knowledge-base/employmentlawupdate/tackling-false-self-employment/

To me this states that the agency is responsible for the tax deductions.

The second part that caught my eye with the proposed legislation is what is called A Targeted Anti Avoidance Rule (TAAR) to prevent avoidance by sole traders as a result of mass incorporation to escape the legislation:

The TAAR will be designed to “enable HMRC to consider both:


HMRC’s document goes on to say:

“This means that people who set up PSCs for a reason other than reducing tax – such as the limited liability protections incorporation provides – would not be within the TAAR. However, HMRC would be able to use the TAAR in the most egregious cases where, for instance, an agency requires all of their workers to set up PSCs to avoid the new legislation.”
In other words if everyone on the same agency is being paid via an Umbrella company (PSCs) it is obvious that it’s for one reason: so the agency can avoid paying their tax. The new Umbrella scheme as well as being challenged with walkouts and industrial muscle should also be challenged legally. If you are working for an agency from the 5th April onwards, I would suggest you either contact your Unite full time officer (http://www.unitetheunion.org/how-we-help/listofregions/) or phone HMRC on 0800788887 where you can anonymously report the agency for tax avoidance.

The reason the agencies are all fighting tooth and nail from having to take us all on PAYE is simple: if you are working on a site after 12 weeks you are entitled to the same terms and conditions as an employee of the same company. So if the agency you are employed by is subbing you to a JIB company, after 12 weeks the agency will have to give you JIB terms and conditions. https://www.gov.uk/agency-workers-your-rights/your-rights-as-a-temporary-agency-worker 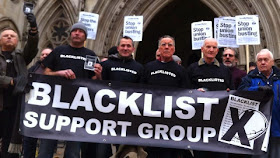 The final piece that has fallen into place for us over the last couple of years is that the tremendous work the Blacklist Support Group has been doing is finally paying off. The campaign that has been waged against rogue employers who blacklisted workers for raising health and safety concerns and standing up for workers rights has gone from being a small group of activists in a room, to a multi million pound law suit in the high court and a parliamentary investigation.

This has shaken the big companies. The fear of losing the court case and having to pay out large sums in compensation has them sweating enough. But the findings of the Scottish Affairs Select Committee that “Construction firms that blacklist, or do not make proper reparations for past blacklisting, should be denied public contracts” has really got them running scared.  The threat of losing billions in public contracts will no doubt panic them even more than paying millions in court costs and compensation.
http://www.parliament.uk/business/committees/committees-a-z/commons-select/scottish-affairs-committee/news/blacklisting-substantive/

Without doubt I believe now is the time we really need to be pushing hard to change this industry and get decent jobs with decent pay and conditions. These companies and agencies are not going to give in easily. But they need to show that they are cleaning up their acts with regards to blacklisting and with the constant pressure of investigations by HMRC for tax avoidance and having to look over their shoulders for the rank and file, now is the time to claim our industry back.