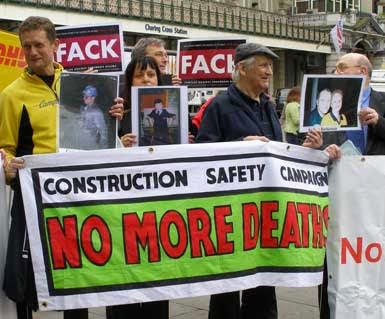 Following the death’s of two construction workers and the very lucky escape from death of one other, all within six day’s in London last week Peter Farrell, Chair of the Construction Safety Campaign, said: "There must be no return to the killing fields of old on London’s construction sites. We demand urgent action by the Health and Safety Executive (HSE) telling all construction employers they will not tolerate any increase in construction worker deaths.


“Construction employers must also stop banning trade union activity on site as they are currently on some major projects in London. They must be reminded of the positive influence of unions as happened on the Olympics site where happily no-one was killed.”

The details of the incidents last week are:

Sunday 2nd March
A construction worker was killed on a construction site in the Warton Rd area of Stratford. He was struck by equipment on an excavator.

Friday 7th March
A construction worker was killed by falling concrete while working underground on the Crossrail project at Fisher St in Holborn.